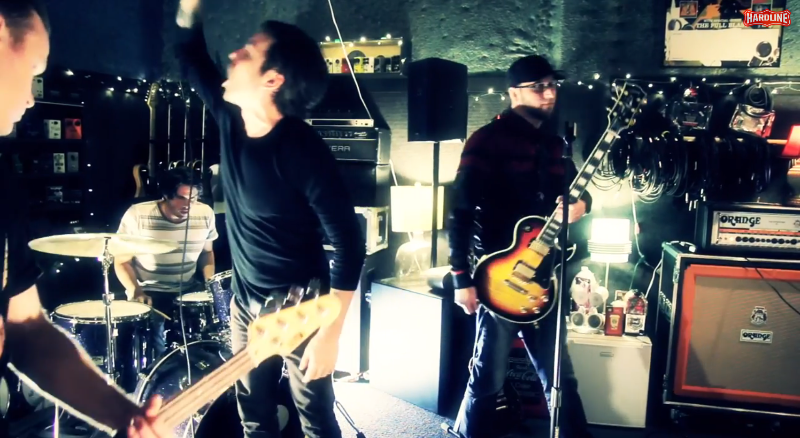 Los Angeles, CA – So-Cal rock band Nations Afire has premiered a new video for their song “Break Your Fall” today at RevolverMag.com. The track is featured on the band’s latest record, The Ghosts We Will Become, which is available now on iTunes and from Hardline Entertainment at www.HardlineEnt.com/store.

Nations Afire’s video for “Break Your Fall” was directed by the band’s bassist Brett Rasmussen and Timmy Lunsford, filmed by Exit House Films, edited by Lunsford and shot in the band’s hometown of Los Angeles.

“We wanted to shoot the video in the middle of the night in downtown LA to show the beauty of the city after dark,” Rasmussen explains. “We shot the video over a couple nights between the hours of 12am-4am, it was basically a ghost town at that point and we could just wander around anywhere and capture some really cool images. Having Nik walk through the city on his way to rehearsal was a cool way to showcase the city scape of LA at night. Most musicians rehearse late at night, which is a pretty unique thing about being in a band, usually people go to work at 9am and are inside all day. Musicians typically start rehearsing late at night when the rest of the world is sleeping.”

“The song “Break Your Fall” is written directly from my experience growing up with my little band of friends and compatriots,” adds singer Nik Hill. “We dreamed big and fucked each other over and picked each other up so many times it shaped the men we became. The music and the lifestyle we led was reckless but it gave us purpose and a possible future, some of us made it out and some of us did not. The words in this song are an homage to the most influential time of my life, and a bond that will always be there, no matter where we all would land.”

Comprised of former guitarist for Rise Against, Chris Chasse, vocalist/guitarist Nik Hill and bassist Brett Rasmussen of OC hardcore band Ignite and ex-Death By Stereo drummer Todd Hennig, Nations Afire are an alternative rock band from Los Angeles.  Their latest record, The Ghosts We Will Become, features incendiary rock-radio anthems like “I Am An Army,” “Nine Lives,” and  “The Ghost We Will Become.” The video for “Break Your Fall” is their fourth and final video from the album. The band will begin working on new material for their next release soon.