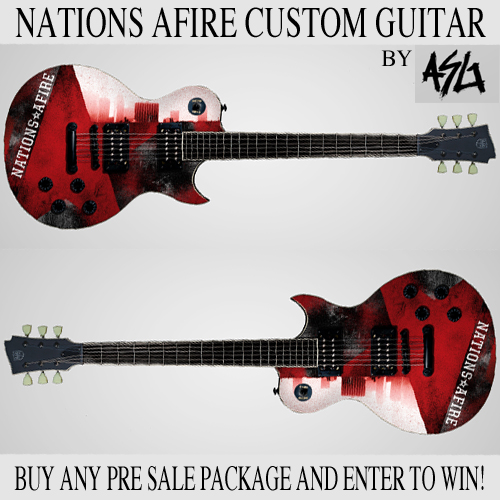 [fblike]
NATIONS AFIRE DEBUT NEW ROCK ANTHEM “PICK UP THE PIECES”
Current/Former Members of Rise Against, Ignite and Death By Stereo
Launch Pre-Order Contest For The Ghosts We Will Become Today!
May 21, 2013 – Los Angeles, CA – Rising Southern California rock band Nations Afire has released a new song today called “Pick Up The Pieces” from their forthcoming debut album, The Ghosts We Will Become, which is scheduled for release on July 2nd via the Hermosa Beach indie label Hardline Entertainment.  Fans can get another taste of the album with “Pick Up The Pieces” today at Artist Direct.com.
Listen to “Pick Up The Pieces” now at Artist Direct.com.
”Pick Up The Pieces” is a song written about the domestic violence in our communities, in our neighborhood, in our homes,” vocalist Nik Hill tells Artist Direct.com.  “It is an isolating experience and the lyrics are meant to empower and shine a light on this issue, to prove that we cannot be broken by these things, by our pasts and more importantly to say something now, help each other get out of these violent surroundings. Turning victims into heroes, and giving voices to those too afraid to speak up.”
“Pick Up The Pieces” is the latest, hard-hitting track from the band’s forthcoming album The Ghosts We Will Become, which also features the rock anthems “I Am An Army,” “Nine Lives,” and  “The Ghost We Will Become.”  Nations Afire is a four-piece rock act made up of current and former members from internationally known rock acts, including singer Nik Hill (of Ignite), bassist Brett Rasmussen (of Ignite), guitarist Chris Chasse (ex-Rise Against) and drummer Todd Hennig(ex-Death By Stereo).
Additionally, the band has launched a pre-order for The Ghosts We Will Become and is giving fans a chance to win a custom Nations Afire guitar in their official Pre-Sale Contest.  Pre-order the new album and enter to win the guitar now at Hardline Entertainment Store.
Visit Nationsafire.com and Hardlineent.com for news and information regarding upcoming new album.
For More Information:
www.nationsafire.com
https://www.facebook.com/NationsAfireOfficial
https://twitter.com/nationsafire
http://instagram.com/nationsafire
http://www.myspace.com/nationsafire
http://www.youtube.com/nationsafire
https://hardlineent.com/
[fbshare]