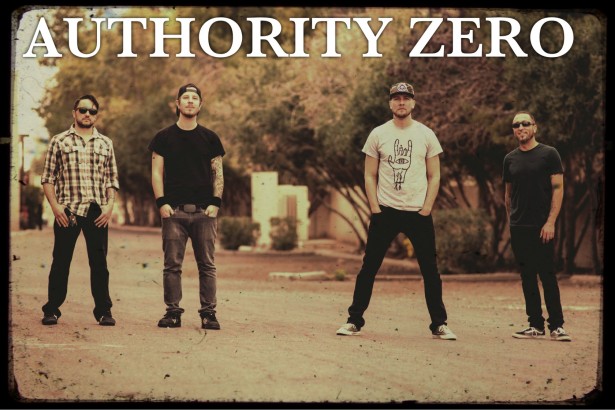 Band releases mash-up video from their epic Tempe NYE show, calls for fan submissions for “Lift One Up” video.

Authority Zero – the reggae-infused punk band hailing from Mesa, Arizona – are releasing a mash-up video today that captures their annual New Year’s Eve performance at the Marquee Theatre in Tempe, AZ. The band is also calling for submissions for their next video for the single “Lift One Up.”

Shot by collaborator Randall Record, the New Year’s Eve video depicts the special guests, set lists, and other surprises that the band had in store for their fans. To make things interesting, the band dubbed the show a “whiteout-blackout” party complete with glow in the dark paint and black lights, and performed their debut album A Passage In Time from front to back for the first time in over a decade.

Additionally, Authority Zero is calling for submissions for their next video. Starting today, the band is accepting fan-made “shake face” videos and other slow motion footage for inclusion in the music video for the song “Lift One Up,” the latest single off their 2013 release The Tipping Point (Hardline Entertainment). Like the song, the video will be a celebration of their global community of fans.

Lead singer Jason DeVore explains: “After hinting on Facebook that we are highlighting our fans in our next video, we got an overwhelmingly positive response. We had people from all around the world offering to do things above and beyond our expectations. Luckily, we are only asking one simple thing: show us your ‘shake face.’ What is a ‘shake face’ you ask? Pretty much what it sounds like: slow motion footage of you erratically shaking your face from side to side for 5-10 seconds.”

In addition to “shake face” videos, the band will also consider all other slow motion footage. “Get creative and have fun with it,” DeVore explains. “We’ll consider anything that’s in slow motion – from your grandfather, skate tricks, a wet dog, bungee jumping, you name it. So long as its in slow motion, it will be reviewed for inclusion in the video.”

Here’s how fans can submit their footage:

Authority Zero will also be embarking on a co-headlining tour with Guttermouth starting January 31st at the Observatory in Santa Ana, CA, and a full U.S. tour with the Ataris, Drag the River, and Versus the World beginning March 5th at the House of Blues in West Hollywood, CA. (Dates below.)

Authority Zero w/ Ataris, Drag The River, Versus The World

Mesa, AZ based punk rock royalty AUTHORITY ZERO has managed to weather the music industry storm and endure living on the road away from friends and loved ones for almost two decades. With four studio albums under their belt, two live acoustic albums, and two EP’s, they appear to be just getting started. The band just wrapped on their fifth full-length studio album, The Tipping Point. The new album is out now via Hardline Entertainment-US/Canada/Japan, Concrete Jungle-Europe/UK and 3wise Records-Australia. Authority Zero is set to embark on a 2014 U.S. tour in support of the release. For more information visit  www.authorityzero.com and www.facebook.com/authorityzero.

Founded by Ken Seaton, Hardline Entertainment is a Hermosa Beach-based record label and artist management company featuring some of the best up and coming bands in the West Coast alternative music scenes. Hardline proudly supports DIY ethics and has maintained this core principle while exposing new music to listeners without depending on major label support. Hardline is the home of Allura, Authority Zero, Death By Stereo, Hoist the Colors, Nations Afire, Neo Geo, Versus the World, and more. For more information visit  www.HardlineEnt.com and www.facebook.com/HardlineEntertainment.