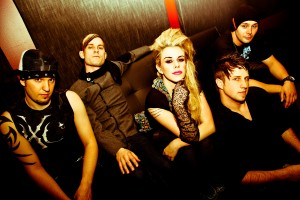 Hey Everyone, Hoping you can all help Hardline Ent. Artist NEO GEO by voting for their video of “Can’t Catch Me” on MTVUs FRESHMAN. Check out the video and help blow this up! Please vote and tell everyone you know to do the same.

The show spotlights emerging artists on air and online, with the chance for one of the videos to get an automatic add into rotation on the channel the following week of voting. Fans can vote on these videos online, starting Monday morning, and votes will end on after 2 weeks on the second Friday at 2:00 PM (EST) and be tabulated. Please feel free to spread the word and get fans to vote on your video! Also feel free to pull the clips from out site and place the mtvU version on your pages and social networking sites.

Neo Geo’s self titled release is officially out today on Hardline Entertainment, so what better way to celebrate than to have their brand new music video  for “Can’t Catch Me” debut exclusively on the Vans Warped Tour website!

AOL is hosting an exclusive stream of the album all week long for your listening pleasure!

Make sure to pick up your digital copy of the album now available on Itunes and catch them on this summer Vans Warped Tour 2011!

Hardline Entertainment acts Phathom and Allura are featured in the new installment of Vans TV ‘Pass the Bucket’.
Watch as Hardline founder Ken Seaton and Fletcher Dragge of Pennywise talk about their commitment to helping smaller bands in the music industry today.