The vinyl will be available in transparent red, white or blue and will have a black and white silk screened American flag on the reverse side. This is limited to 150 units of each color. Records ship late March.

The record is now available for pre-sale via the Hardline Entertainment web store at https://hardlineent.com/product-tag/1-thing/
“I like go-go music and soul and anything that really moves. I first heard Amerie’s “1 Thing” in 2005, when it was released. Fucking infectious man, the way that groove keeps rolling, and she’s such a great vocalist. The lyrics were your basic relationship trip but then it hit me, this isn’t just a song about some dude, these lyrics read like a song to a system or a government that’d been up to no good. When she sang, “memories keep ringing bells” I was thinking of the state of our union today, the turmoil in our society, and where we’d been before—I was musing on our involvement in the Middle East, Latin America, Vietnam. I was thinking about the dirty deeds that this nation had been up to and then she sang, “why don’t you just admit it” and I realized that no one in power, not in this country, was ever gonna admit that we were wrong.” 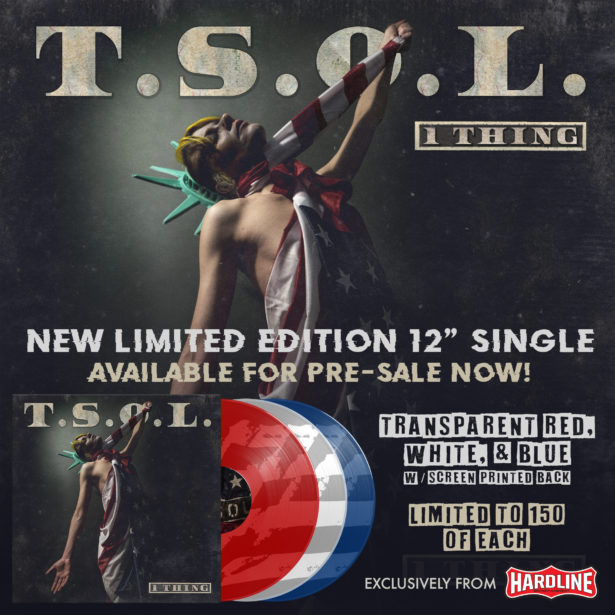 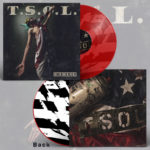 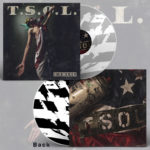 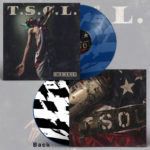 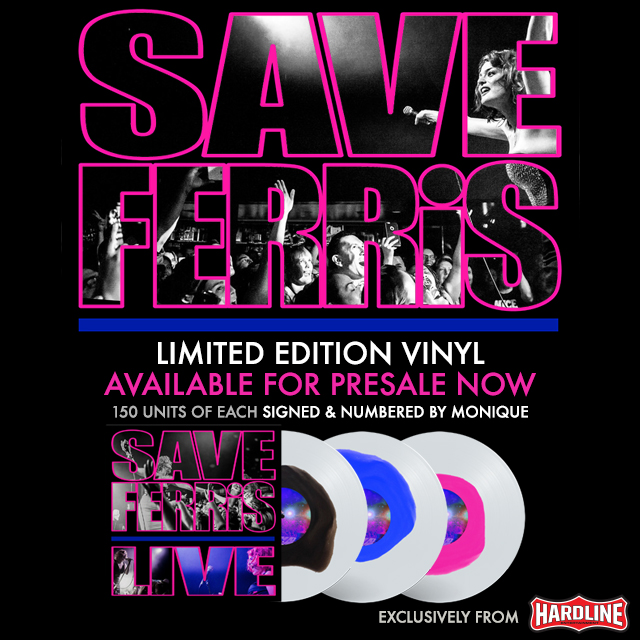 Southern California Ska Veterans Save Ferris are set to release their very first ever live record on Limited Edition Vinyl via Hardline Entertainment.

The performance was recorded live from The Santa Monica Pier in Santa Monica, CA Aug 26th,  2016.  The record includes several tracks from their major label releases “It Means Everything” and “Modified”.

The recordings will be available and limited to 150 units each of black and white, pink and white and blue and white vinyl all signed and numbered by Monique herself and will include a digital download card.
Vinyl ships Summer 2018.

The record is now available for pre sale via the Hardline Entertainment web store at HardlineEnt.com Click Here

“Great news! After the 20+ years of the bands’ existence, Save Ferris is releasing our first live record EVER. I know you’re going to love it. It was recorded on an amazing night, and I couldn’t be happier to share this really fun show experience with all of you in which we play just the classics…”

Sunday April 29th @ Back To The Beach Fest Huntington Beach, CA with a Legendary Ska Line Up

More about Save Ferris Here 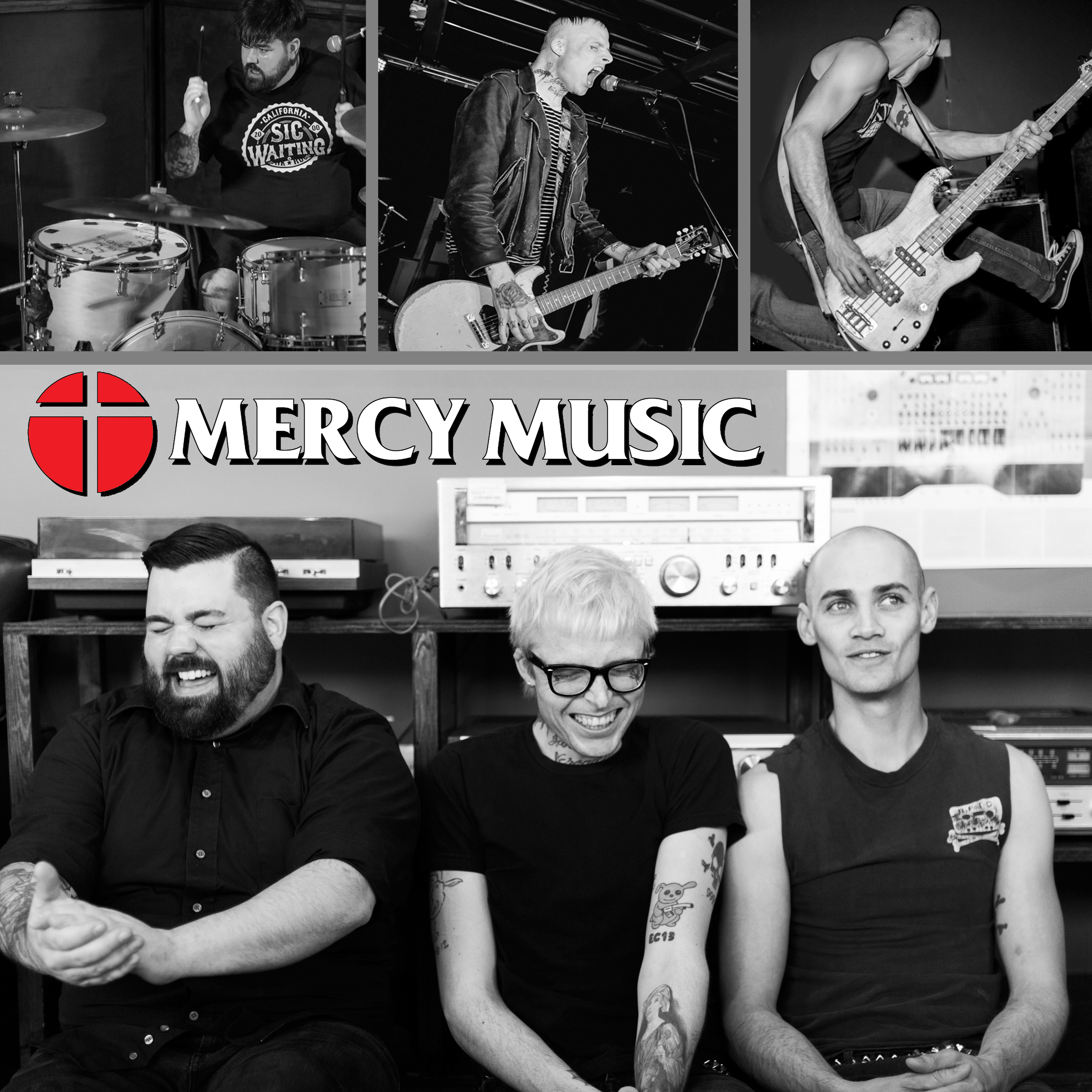 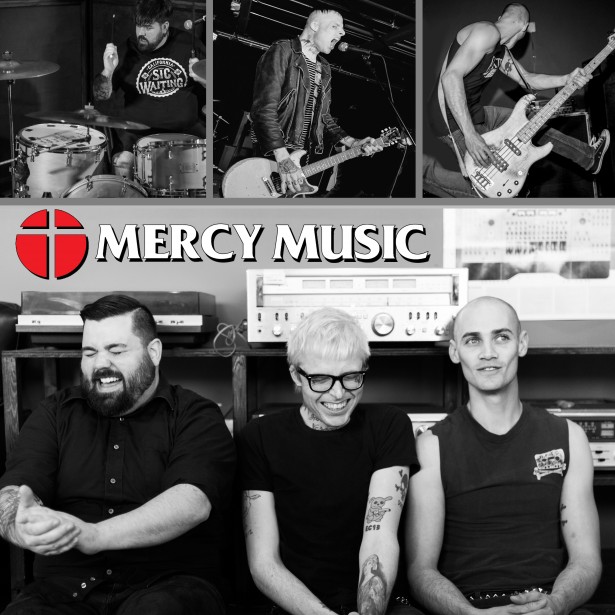 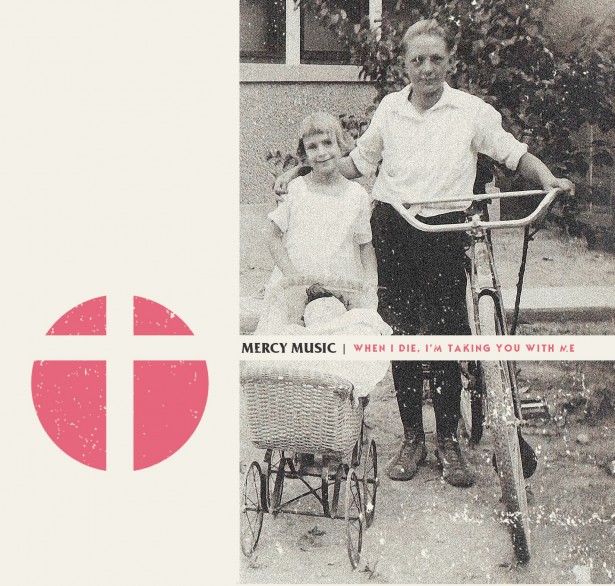 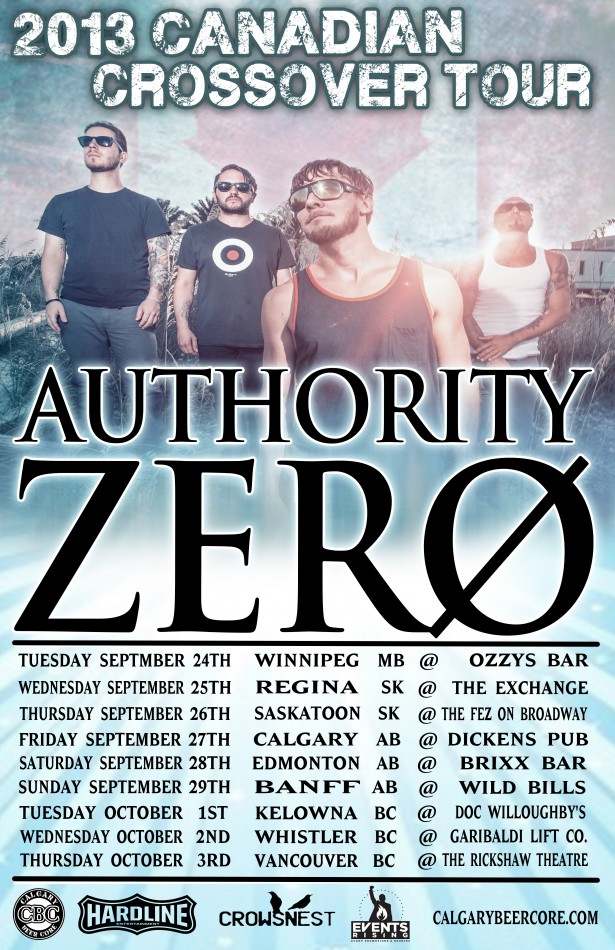 [fbshare]
Mesa, Arizona’s punk-rock-reggae band Authority Zero has announced they will be heading north for the “2013 Canadian Crossover Tour”, which kicks off in Winnipeg on September 24th and ends in Vancouver on October 3rd.
Authority Zero are currently touring in support of their recently released fifth studio album, The Tipping Point, which was produced by Cameron Webb (Pennywise, Social Distortion, Motorhead) at Maple Studios in Orange County.  The album melds an amalgam of punk rock, rock ‘n’ roll and reggae on twelve high-energy tracks like the “No Other Place” and “21st Century Breakout.”
Fans can purchase a copy of The Tipping Point now from Hardline Entertainment (www.HardlineEnt.com/store) and catch the band on tour this fall.
For More Information:
www.AuthorityZero.com
www.Facebook.com/AuthorityZero
www.HardlineEnt.com
www.facebook.com/HardlineEntertainment
[fblike] 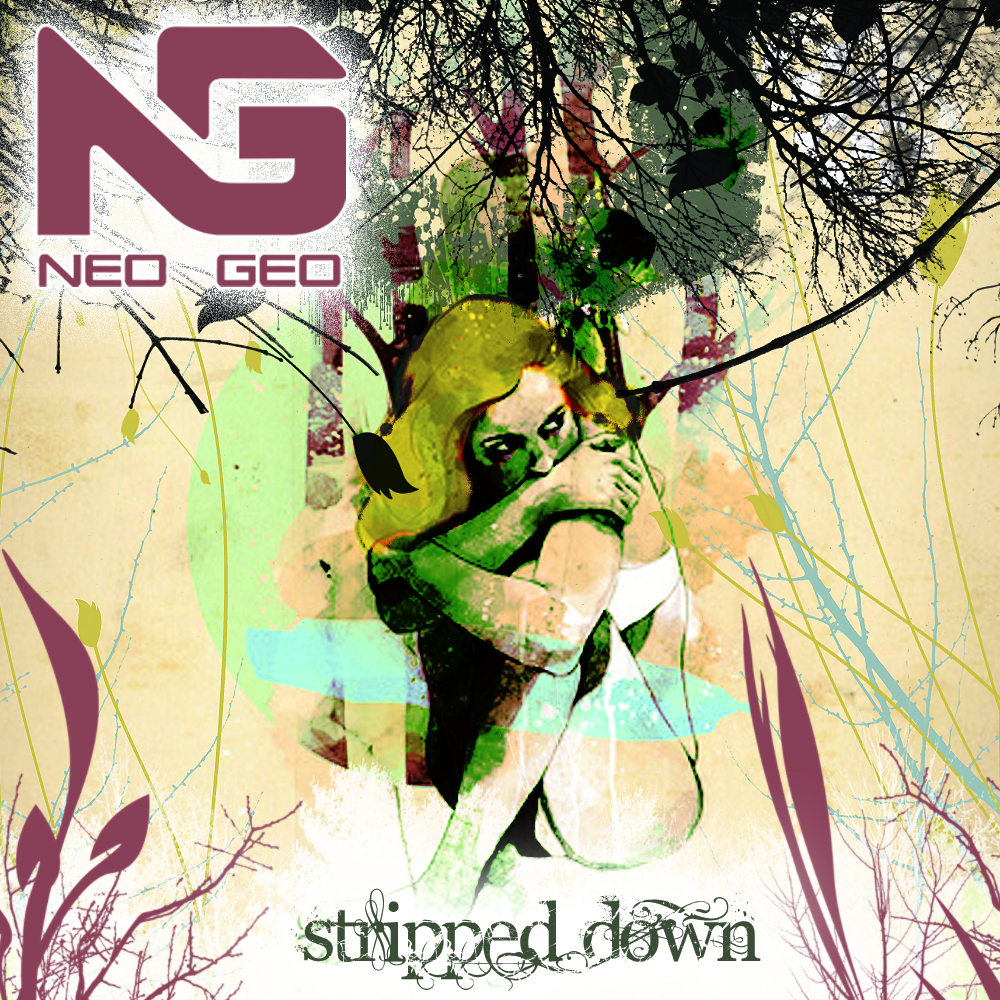 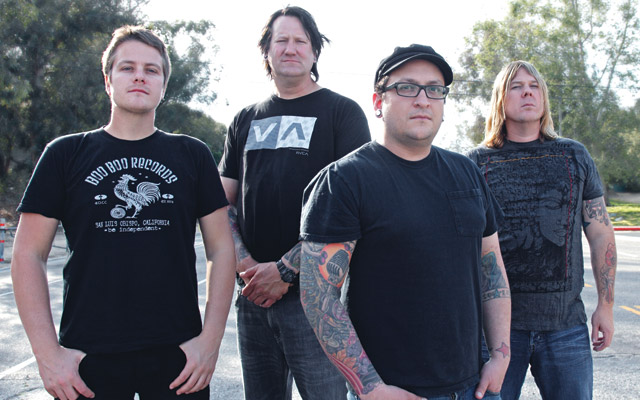 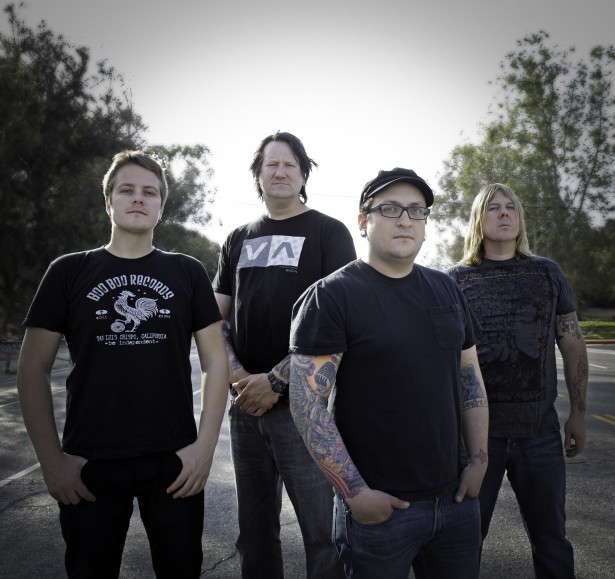 August 9, 2012 – Los Angeles, CA – Southern California rock band Versus The World has announced they will join MXPX Allstars and Unwritten Law on a fall U.S. tour in support of their new album, Drink. Sing. Live. Love., which was released on July 31 from Viking Funeral Records.

Versus The World recently wrapped up a tour with labelmates Authority Zero preceding the release of their new album, Drink. Sing. Live. Love, which has catapulted the band to the forefront of alternative rock as one of the hottest up-and-coming bands in the genre.

The band recently released an explosive new video for their new single, “A Fond Farewell,” which can be viewed here: http://youtu.be/TXiT3VIxl5g 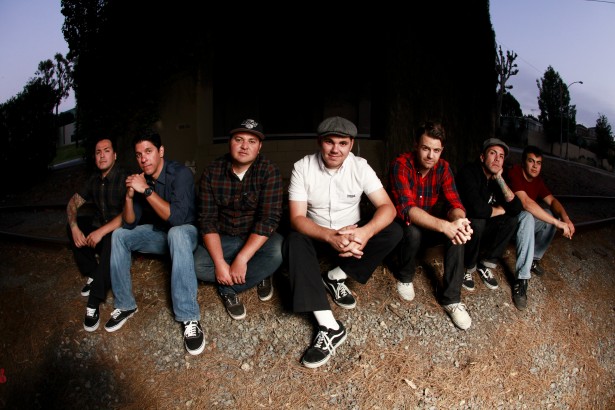 “We are thrilled to bring Hoist the Colors into the Hardline family,” said Hardline principal and CEO Ken Seaton. “Their energetic live show, huge stage presence, and original sound make Hoist the Colors stand out in a sea of cookie-cutter bands.”

“Hardline has a track record of working tirelessly for their bands and putting out music they believe in, so signing with them was a no-brainer,” said Hoist the Colors’ lead singer and founding member Josh Linden. “With Hardline behind us, we can’t wait to release our next record and get out on the road to connect with new audiences across the U.S. and abroad.”

The band is currently in the studio recording their Hardline debut, entitled Miles to go Before We Sleep. The full length will be their second studio album and the follow up to 2011’s self-releasedSecond City. The first song from the new album, “Sail on Sweet Soul,” was recently included in Hardline’s free “Music Comp Vol. 2,” which features 12 tracks from Hardline and Viking Funeral Artists Death By Stereo, Authority Zero, Neo Geo, and many more. The comp is available for free download athttps://www.hardlineent.com/download/.

Founded by Ken Seaton, Hardline Entertainment is a Hermosa Beach-based record label and artist management company featuring some of the best up and coming bands in the West Coast alternative music scene, with genres including punk rock, metal, hard rock and reggae. Hardline proudly supports DIY ethics and has maintained this core principle while exposing new music to listeners without depending on major label support. The 2012 “Hardline Entertainment Compilation 2” features new music from artists on both Hardline and Viking Funeral Records, a label imprint run in partnership with Seaton, Pennywise guitarist Fletcher Dragge, and Kevin Zinger from Suburban Noize. The track listing includes music from Authority Zero, Versus the World, The Darlings, Death by Stereo, Neo Geo, the Manic Low, Thousand Watt Stare, AllurA, Phathom, Hoist the Colors, Lionize, and Musket. The compilation is currently available for free download and will be available at all Hardline events throughout 2012. www.HardlineEnt.com

Hailing from the urban sprawl of Los Angeles, Hoist the Colorsplays a blend of punk rock, traditional Irish music, Americana, and bluegrass that is as eclectic and original as the city they call home. Their signature sound features a mix of traditional (mandolin, banjo, and fiddle) and rock instruments (drums, guitar, bass) that appeals to fans of punk rock, folk music, and everything in between. The seven-piece band is currently recording their second studio album, entitled Miles to go Before We Sleep. Hoist the Colors’ debut album,Second City, is currently available for purchase on iTunes and available for streaming on Rhapsody and Spotify. For fans of The Pogues, Chuck Ragan, The Gaslight Anthem, and Flogging Molly. 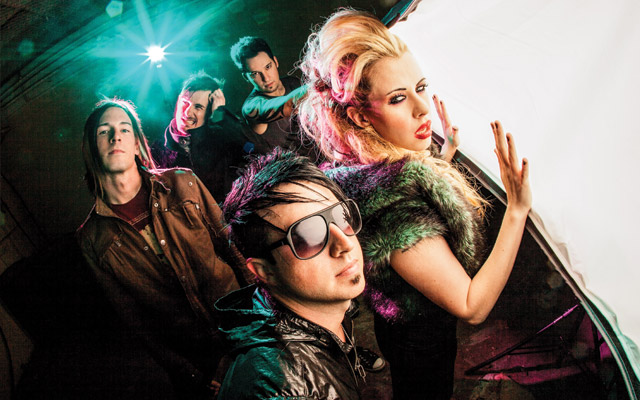 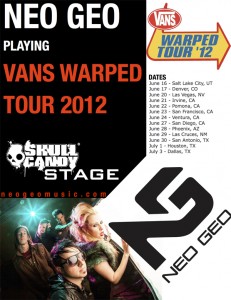 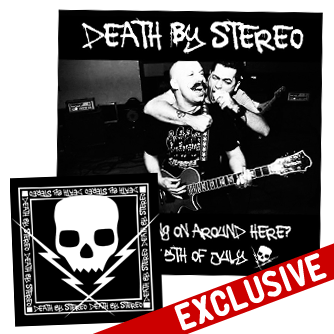