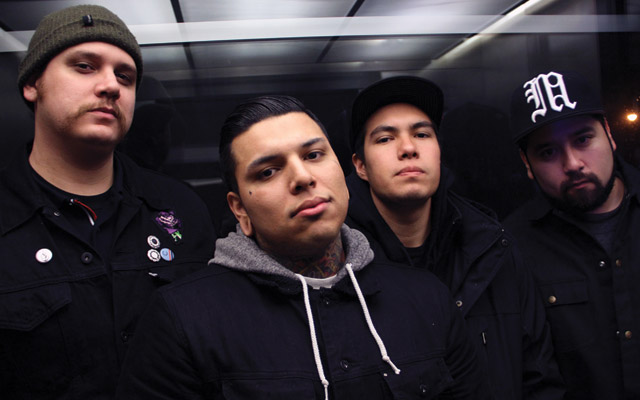 In it’s infancy, The Sparring originated as a project between former Dear and Departed/Tiger Army drummer Joel Bourne and road dog guitarist Jay Stolo. Wanting to step from behind the drum kit and into the center stage spotlight, Bourne made the transition to frontman while Stolo manned the songwriting duties. Hitting the ground running, the band added Gilbert Pichardo and Stolo brother Josiah on drums and immediately began performing.

Setting a frenzied pace within just the first six months as a functional band, The Sparring managed to turn heads with their self-produced 3-track EP (via Old Shoe Records). Resulting in 3 national tours, including a coveted spot on the Vans Warped Tour – The Sparring connected with a broad spectrum of touring bands including Every Time I Die, Face to Face, Death By Stereo, and Street Dogs. Marking the end of the band’s first full year, the full-length debut, Dock, Boats, and Ropes met critical praise and resonated with fans from various genres, ultimately augmenting the reputation their live show had already cemented.

Amid line-up changes and the eventual growing pains synonymous with anchoring a band, the speedy rise for The Sparring forced the band to collectively step back to regroup, refocus, and rearrange.

However, even during the group’s presumed down time The Sparring remained not only relevant but sought after among punk purists and hardcore aficionados, performing one offs with the likes of Dead Kennedys, Gallows, Cancer Bats, US Bombs, Strike Anywhere, and The Acacia Strain. It was also during this time that band added their full time frontman in Copper Fernandez and a second guitarist in David Yllescas (Flattbush, Kool Arrow Records). Joining forces with Lee Barratt of the UK Hardcore juggernaut Gallows, the enlisted help transformed the already atypically heavy punk outfit into an all out assault, fueled by punishing percussion, aggressive guitar work, and volatile vocals.

Toeing a fine line between genres The Sparring harnesses elements of street corner hardcore, no gimmick thrash, and blue-collar punk, leading the charge among a new generation of musicians adamant on retaining the ethos of aggressive music, delivered with genuine release. The Sparring recently emerged from the studio with Paul Miner (Thrice, Terror, New Found Glory) to mark the release of their latest 5-track EP slated for a 2013 release via Hardline Entertainment. Resonating with fans of punk rock, hardcore, and West Coast thrash, The Sparring is the new generation of heavy music – delivered with discernment and sincerity.

Once again, the gloves are coming off.