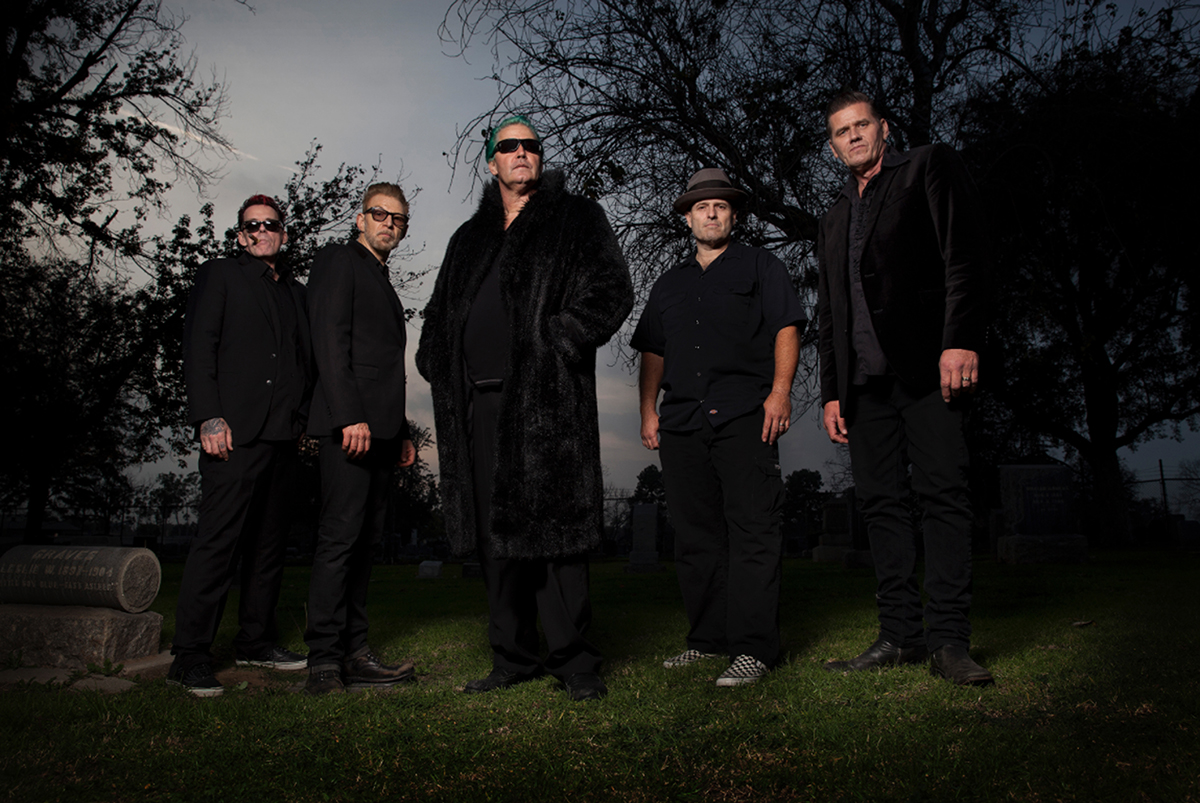 In the early years of Los Angeles punk, one of the premiere hardcore bands was T.S.O.L., which stood for True Sounds of Liberty. Offering poppier music than many of their contemporaries and featuring an image that appealed to punks who wanted to dive deeper into the gothic subgenre already being offered by many British punk bands, T.S.O.L. became hugely popular on the local scene but never translated that success to national exposure because of their ever-shifting lineup and sound.

Formed in 1978 by four pasty-faced youths with a passion for the emerging hardcore scene, T.S.O.L. was originally based in Huntington Beach, California. Featuring the lineup of vocalist Jack Grisham, guitarist Ron Emory, bassist Mike Roche, and drummer Todd Barnes, the band burst onto the local club scene with an image that included white face paint and dark, energetic anthems about alienation and troubled youth. A few members had already tried their luck with a band called Vicious Circle, so gigs in the South Bay and Orange County were easy to get despite many of those shows ending with riots that would ban them from the very same clubs. A politically fueled eponymous EP would be the band’s first official release, and its emotional sound and vicious attitude were enough to ensure their standing as a major force in the scene.

Playing around California with contemporaries like the Damned and the Dead Kennedys, they managed to write enough material to finally release a full-length record. A brief visit to the studio resulted in Dance with Me, a phenomenal gothic punk record that paved the way for bands like the Misfits and the Lords of the New Church to make similar music. Finding their niche, the band began headlining major shows with young bands like Bad Religion, Suicidal Tendencies, and Social Distortion often opening. The self-described “Orange County Invasion” had begun, and they were the first band to reap the benefits of the new sound. The group moved to Jello Biafra’s fledgling Alternative Tentacles label, which promptly released the Weathered Statues EP at the end of the year. Despite its melodic leanings, no one could have predicted the next step.

Beneath the Shadows was released in 1982 and blew away all the preconceived notions about the group’s sound. T.S.O.L. had put out a record that equaled Meat Loaf when it came to sheer sonic pomposity but still retained their gothic punk leanings. Fans were mildly confused, but the band garnered rave reviews and was featured in director Penelope Spheeris’ Suburbia documentary as a result. But internal troubles were brewing, and their ever-growing popularity was tempered by the loss of both Grisham and Barnes. Pausing only briefly, T.S.O.L. trudged on with new singer Joe Wood (Grisham’s brother-in-law) and drummer Mitch Dean.

The Dead Kennedys lent the band their van to tour with, and they began traveling around the U.S. with their new members. Finding that their new material reflected the growth of the British goth genre they had admired, 1984’s Change Today? came out on Enigma Records with a different flair than past efforts. The guitars were gloomier and more focused, while Wood’s melodramatic croon sharpened the whole affair into a unique L.A. goth sound. Becoming quite big in Southern California, their increased exposure began to influence the tone of the band. By the time of 1986’s Revenge, a general poppiness began to creep into their sound that was more in keeping with the hard rock scene that was growing around them.

Still, excellent tracks such as “Nothing for You” (which was featured in the punk rock horror classic Return of the Living Dead) still displayed an edgy obsession with dark sounds and moods. But 1987’s Hit and Run was a sudden departure for the group, seeing them adopt a persona that was in tune with bands such as Poison and Faster Pussycat. This was not only evident in the forced and awkward pictures adorning the album, but more unfortunately, in their sound as well. Alienating their audience in vast numbers, Emory and Roche were clearly uncomfortable with this new direction and their contributions began to suffer because of it. Tours with the Red Hot Chili Peppers and Guns N’ Roses only emphasized the dual personalities the band had developed during this period. A live album practically documented the sound of the two sides of the band splitting, and Emory was gone before they stepped up to record their next record.

They first attempted to plug in his spot with San Diego guitarist Scotty Phillips, but he quit before they could record with him, and they eventually ended up hiring L.A. guitarist Marshall Rohner. By then a hair metal band in every way, the superficial Strange Love was met with indifferent sales and a shrinking audience in 1990, a poor fate for the ailing band. Roche was the next to go; his growing discomfort with the direction of his band sent him packing and he was the last original member to leave. To show how vastly out of the loop the band had become, a greatest-hits album was issued in 1992 with an emphasis on their late-‘80s material. Proudly boasting the “evolution” of the group, the inside liner notes gave a detailed description of what had gone wrong with the band, but didn’t support the theory of the band’s evolution. The resurgence of underground music into the mainstream would have made a collection of their early-‘80s material a more sensible way to promote the band, but the lack of original members clouded any insight T.S.O.L. had into their own history.

Meanwhile, the original members had started playing shows under the less-than flattering moniker T.S.O.L.: The Original Members since Wood and Dean owned the rights. They released a solid live album under this name but stopped playing together soon after. Drugs kept them from maintaining any sort of regular music gigs, while the new version of T.S.O.L. was dropped from their label and relegated to performing clubs. By 1996, T.S.O.L. fans Slayer did the band an enormous favor and covered a few early songs for an all-covers album. As the original members began to sober up, and they realized that they still had a passion for their music and there was still an audience for their brand of hardcore. Pulling together in 1999, they fought a rough battle with Wood for rights to the name until they finally wrestled it from him and hit the road with the annual Warped Tour. Barnes had passed away in his time away from the band, but the remaining members recruited drummer Jay O’Brian and released the hardcore “Anticop” single to announce their re-formation.

Nitro Records reissued the albums featuring the original lineup, and by 2001, Disappear marked the first full-length album with Grisham behind the microphone in almost 20 years. Then during a November 2002 show at West Hollywood’s House of Blues with the Adolescents, two people were shot backstage and subsequently sued both the venue and the band over their injuries. T.S.O.L. was later cleared of any blame surrounding the incident, but high legal fees (over $13,000 worth) kept the guys from doing any kind of extensive touring over the few years it took to settle the case. They did, however, use the time to record what would become their final record, September 2003’s Divided We Stand. After two final shows at Long Beach’s The Vault in the fall of 2006, T.S.O.L. officially called it quits.

The band’s retirement proved to be short-lived however, and by the end of 2008 they were back in the studio laying down tracks for a new album. The resulting Life, Liberty & the Pursuit of Free Downloads, released to coincide with their 30th anniversary, arrived in 2009. The band spent the next few years working on various non-T.S.O.L. projects, but returned in 2013 to release a 7” EP for Record Store Day. In early 2017, the band issued their 11th studio long-player, The Trigger Complex, via Rise Records.

TSOL “Live at The Observatory” set to release June 2018 via Hardline Entertainment.