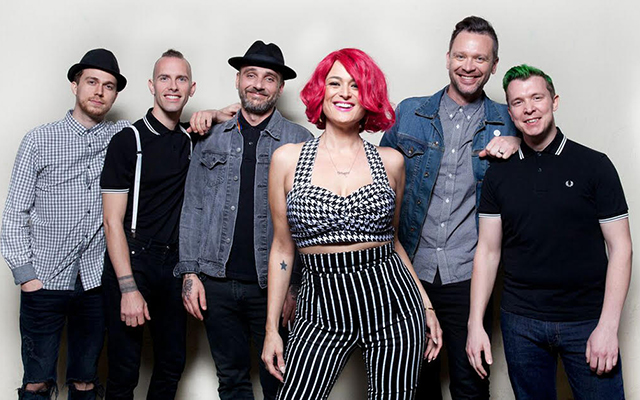 Save Ferris is a ska-punk band formed in Orange County, California circa 1995. Their name is a reference to the 1986 film Ferris Bueller’s Day Off. Lead by the inimitable front-woman Monique Powell, the band enjoyed mainstream success in the late 1990s with radio hits, constant touring and appearances on a variety of television shows and movies.

The band released their debut EP “Introducing Save Ferris” on Powell’s own Starpool Records, in 1996. They ended up selling close to 20,000 copies of their EP out of the trunks of their cars, thanks to loyal fans and huge support from Orange County independent record shops. That same year, Powell provided vocals on the Reel Big Fish song “She Has A Girlfriend Now” on their album “Turn the Radio Off” (Mojo).

As favorites of KROQ radio’s legendary Rodney on the Rock, Save Ferris became a regular presence on LA’s KROQ radio. Later that year, the National Academy of Recording Arts and Sciences gave the band a Grammy showcase award for best-unsigned band, earning them a recording contract with Epic Records (SONY). The band released their debut full-length album for Epic in 1997. “It Means Everything” featured several re-recorded tracks from the EP, several new songs, a cover of Dexy’s Midnight Runners’ “Come on Eileen,” which the band released as their first official single, and what was to become their most successful single.

With two singles in the Billboard top 100 and full rotation on alternative radio all over the world, “It Means Everything” went platinum internationally. In April 1998, Save Ferris made made their seminal on-screen appearance in the cult classic teen film, “10 Things I Hate About You”. After a thunderously successful main stage tour with the Vans Warped Tour, the band began writing their follow-up to “It Means Everything”, the appropriately titled “Modified”.  Released in October 1999, the album saw the band mix their ska-punk roots with pop-punk stylings.

After almost fifteen years, Save Ferris made their long awaited return to the music scene in 2017.  Following a successful PledgeMusic campaign, the band’s new EP – Checkered Past – was released on February 10th. The EP, produced by Oingo Boingo bassist John Avila, embraces Monique’s ska and dub roots and also features a guest appearance by Neville Staple of the Specials on the first single “New Sound.”

“Since this incarnation of Save Ferris first played together, the band and I have been working on new music, arranging schedules and selectively playing local shows to get ready for a tour. I have had to tell our fans to ‘be patient, I promise it’ll happen’ for too long now! But now here we are. I can’t believe we’ve made it this far….and now you get to see us in a town near you. For the first time in 15 years, Save Ferris is coming to get you! Are you ready?”

The past may be checkered, but this is a new day!