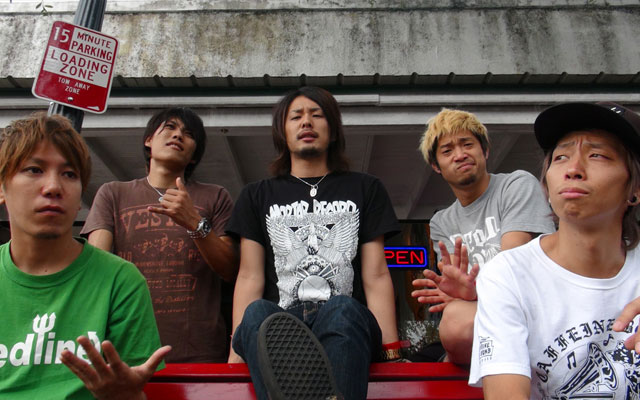 HEY-SMITH is a Japanese punk band from Osaka that has been quickly gaining attention in music scene over the past few years.

The band was formed in Toyonaka Osaka Japan in 2006.

Their first full-length album “14-Fourteen-” debuted No. 6 on the Oricon indie chart.

The band has toured with No Use For a Name, Less Than Jake on their Japanese tours and also performed on the “Rookie a go-go” stage at Fuji Rock Festival in July 2010.

The band’s long-awaited second full length album, “Free Your Mind,” was released in May 2011 and reached No.1 on the indie chart, and played its first-ever US show for “The Fest” in Gainesville, Florida in October 2011.

Currently the band often quickly sell out their shows in 500 to 800 capacity rooms.

Also, most recently, the band performed on the “White stage” at Fuji Rock Festival again this year and has released its first single called “Download Me If You can/Goodbye To Say Hello” in October 2012.

This summer the band plans to release the US version of “14-fourteen” that will combine their 1st EP (a smash hit in Japan) and 1st full length album together as a special edition via Hardline Entertainment.
[hr]